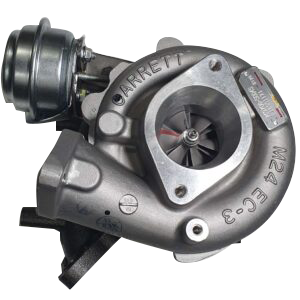 The following information is for guideline purposes only. Please consult your mechanic for a correct diagnosis of your problem as there may be other contributing factors. As turbocharger speed and engine load increases so too does the need for oil as a lubricant and coolant. A short delay in the oil reaching the turbo will result in bearing failure.

An oil delay can be recognized by the blueing of the bearings or shaft which alters in colouration in the shaft when exposed to excessive heat.

A lack of lubricating oil will present in a variety of ways: Foreign material or dirt in the lubricating system (Oil Contamination)

Despite popular assumption oil filters are not capable of removing all foreign matter present in dirty or contaminated oil before it reaches the engine or turbocharger bearings. This can result in very expensive problems.

Foreign material or carbon in the lubricating system will cause damage to the bearings and in sufficient amount cause bearing wear and bearing-housing bore wear or even block the internal oil passages of the turbocharger, starving the unit of oil.

This problem is identifiable by

Oil deterioration is responsible for several problems with diesel engines and turbochargers.

The high temperatures present in a modern diesel engine can cause oils to break down producing carbonaceous materials which stick to the engine rings and other internal parts of the engine and lead to other issues.

As hydrocarbons in the oil mix with oxygen oxidization occurs, producing organic acids of two types: highly corrosive or those with a lower boiling point. If the acids are left to become concentrate they will attack bearings, eventually causing failure.

The remaining oil will respond to the chemicals by forming a sludge which when deposited throughout the engine and allowed to accumulate in the oil systems will pass through the turbocharger. Thrown by a centrifugal force from the rotating shaft against the walls and internal surfaces of the bearing housing the sludge can stick impeding oil flow and resulting in a build-up. Subsequently this will lead to problems with oil drainage, oil leakage at the end of the turbine unit and if let to accumulate on the turbine side will cause a baking to result from the heat and lead to an unbalance in the turbocharger shaft. Outside contamination is oil deterioration at the fault of agents outside of the turbocharger itself. These may include the by-products of fuel combustions such as ash or soot.

The engine itself may contribute to the break down as tiny metal particles produced by wear and tear will pass through the oil ways in the turbocharger, hastening deterioration. Foreign matter from outside the engine may also play a part as dust and dirt may enter the cylinders through the air intake system.

These problems are usually identifiable through the occurrence of a hard deposit of baked oil built up at the turbine end, seal leakage and sludge, particularly around the bearing housing outlet bore.

Damage will be to the compressor wheels which may cause pieces of aluminum to enter the engine and result in engine piston, valve, liner and possible crank-shaft damage.

Should any foreign bodies remain in the system, be they dust or engine valve fragments the turbocharger will suffer a loss of power, damaged wheels, excessive oil usage and may emit black smoke.

Detection of this issue is fairly easy. The turbine or compressor wheel could have sections of a blade(s) broken off and there may be an indentation at the entrance of the compressor cover.

It should be noted that replacing a faulty unit with a new one will not always solve the problem. If there is an engine malfunction or an abnormal working condition in the engine the turbocharger will not be able to overcome this problem, it is more likely to emphasize it.

The delay in boost response between the time the driver accelerates to when the extra power generated by the turbocharger reaches the engine. The severity of the lag is dependant on the size of the turbocharger relative to the actual engine size, turbo efficiency, exhaust back pressure and the engine tuning among other things.

Compressor surge occurs when the air pressure after the compressor is higher than the compressor itself can maintain. If the turbo were to operate in surge for any amount of time it would likely result in bearing damage or failure.

The pressure of the air creates a backflow, building pressure and potentially causing a stall.